The hybrid of intelligence and aesthetic design may be the cause why Xiaoyu 2.0 won Red Dot award. 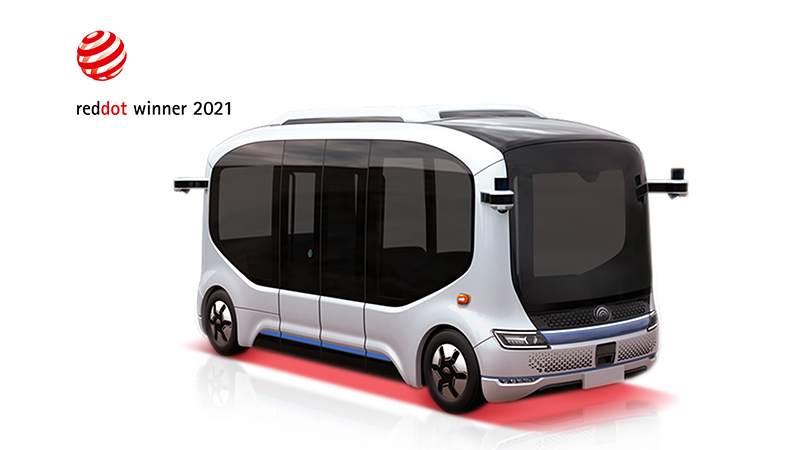 With 5G V2X transmission technology, unnecessary suspending is avoided by the interactions between vehicle and traffic light. Just like the victory of ALPHA GO, upon variety of radars embedded inside vehicle, Xiaoyu 2.0 is the perfect delivery of computing strategy, braking distance, timing and smoothness.

Xiaoyu 2.0 has adopted a full stack solution for both software and hardware, which greatly facilitates its powerful autonomous driving in order to fulfill complicated needs of all-weather transportation. Xiaoyu 2.0 does not rely on infrastructure but by single vehicle intelligence, over 500 TOPS computing power embedded allows Xiaoyu 2.0 to realize superb and smooth operation.

Xiaoyu has a futuristic look inspired by spacecraft. Engineering and aesthetic factors are smartly reconciled by excessive size porthole and the mapping of laser radar and lens. Xiaoyu 2.0 has entered the stage of massive distribution in Guangzhou, Nanjing, Sansha, Changsha and Zhengzhou. The implementation has been over 700 days, reaching 360 thousand trips and 7.1 million kilometers of operations for open roads. Xiaoyu 2.0 is also China’s first autonomous bus which is introduced into tarmac test in Changsha airport.

Yutong may be the earlier player in the field of new energy and internet of intelligence. As of now, Yutong has firmly mastered five essential technologies including integrated perception, decision and planning, execution parameters, on-bus super computing platform and cloud control platform. In 2020, Yutong put great efforts to build up its finest engineering team of autonomous driving in the world, which directly resulted in the best performance of Xiaoyu 2.0.

Looking ahead, autonomous driving is the development trend of the vehicle industry. Yutong shall truly promote the realization of intelligent traffic through Xiaoyu 2.0, which has undoubtedly re-defined autonomous bus. With the development over 50 years in public transportation sector, the essential technology accumulation, especially in the R&D of new energy buses, the early layout of intelligent driving, as well as the all-round commercial operation, Yutong has been taking leading position in the industry worldwide.