On December 20, all Chinese people cheered and celebrated for the 20th anniversary of Macau’s return to the motherland. Over the past 20 years, Macau has undergone tremendous changes - becoming one of the fastest growing regions in the world and enjoying one of the highest GDP per capita. Macau ’s prosperity has attracted worldwide attention. On the occasion of the 20th anniversary of Macau’s return, Yutong buses served as the carrier of the big event, showing the charm of China with high- quality strength. 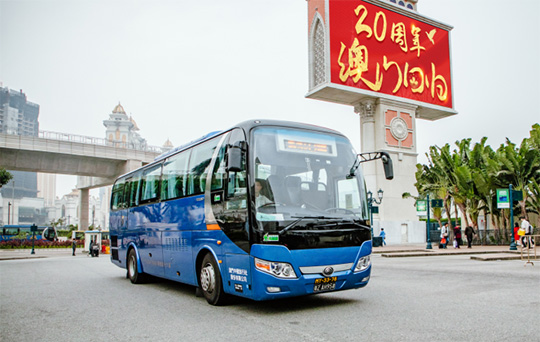 Nowadays, one out of every two buses running in Macau is made by Yutong. Among the full electric buses in Macau, Yutong even takes up 78% of the market share, playing an important role in public transportation and green mobility in Macau. On December 20, 1999, the Chinese government resumed exercising sovereignty over Macau. In the past 20 years, the Macau Special Administrative Region achieved prosperity and development together with the motherland, and Macau's public transportation has also seen rapid development under the good opportunity. Not only the number of buses has increased significantly, but the products of buses have also changed dramatically.

In the past, Macau's buses were mainly imported. With the improvement of the manufacturing level of Chinese buses, Macau began to introduce Chinese buses in sizable volume from 2005. As a leading bus maker in China, Yutong started to enter the Macau market in 2006. The 12 units of 8.3-meter Yutong buses specially customized for Macau were well adapted to the actual conditions of narrow roads and steep bridge slopes in the city, and were highly praised by customers. After thirteen years of development, Yutong buses have accounted for more than half of Macau's total, becoming the No.1 bus brand in Macau. It is worth mentioning that Yutong buses has taken up more than 70% of all newly purchased buses in Macau since 2014.

With the continuous advancement of the global electrification process, Macau also began to actively promote the development of green transportation. In September 2018, the first batch of new energy buses in Macau, namely 20 Yutong full electric buses, were officially put into operation, opening up the new era of Macau's e-mobility. After the operation of these vehicles, Yutong accounted for 78% of full electric buses in Macau, becoming the absolute main driving force for the energy conservation and emission reduction in the city. Yutong’s outstanding achievement in Macau is attributed to its products and services. In terms of products, besides developing bus models with good trafficability, Yutong also improved the level of manufacturing process in terms of vehicle safety and corrosion resistance to adapt to the hot, humid and rainy climate in Macau.

In addition to providing customized products, Yutong's "full care" after-sales service also won universal praise in Macau. As an island city, Macau is vulnerable to typhoons. Each time before a typhoon arrives, Yutong's service staff will remind customers to relocate the vehicles and take protective measures. In 2018, the Typhoon Mangkhut hit many areas in China and many cities suffered from the disaster, but all Yutong buses operating in Macau were in good shape thanks to the thoughtful services provided by Yutong service staff. After two decades of development, now Macau is shining brightly like a pearl in the South China Sea. Yutong will also be deeply involved in the development of the city, helping it to create new glories.