As one of the five Nordic countries, Denmark is a highly developed capitalist country with its per capita GDP ranking in the forefront of the world, which has a strong influence in the Nordic market. 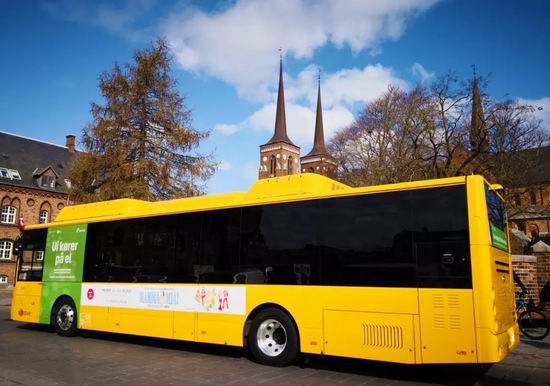 With regards to this, the Roskilde city of Denmark specially organized a citizen riding activity. “Roskilde is the first city in Denmark to use full electric buses. The 20 new energy buses will reduce 1400 tons of CO2 emission per year, which is equivalent to the emissions of 470 ordinary gasoline cars. These new full electric buses are not only environmentally friendly, but also feature lower noise.” said Mayor Joy Mogensen. The Danish National Radio and Television Station covered this event. This is the first time for Yutong to enter the Danish market, and is also the first time that Chinese buses entered the Danish market with sizable volume. The key to Yutong's acquisition of the order is that the E12 boasts a competitive LCC (Life Cycle Cost). After the comprehensive analysis of the price-performance ratio of various products, the customer believed that Yutong E12 has prominent advantage in terms of LCC. Dorthe Nohr Pederson, president of Roskilde's Traffic Management Authority Movia, also said: "These new buses are very convenient to be charged. It can travel 250 kilometers on a single charge. Passengers will feel comfortable to chat on the bus since the noise is very low. " Although the vehicles in Denmark are mainly diesel powered, the country is excepted to fully electrify its city buses in the future. Dorthe Nohr Pederson, president of the Roskilde's Traffic Management Authority Movia, said: “The local traffic management authority has set incentives for companies who operate full electric city buses to promote the deployment of new energy buses.” It is learned that the Danish government has introduced policies to adopt zero-emission city buses amid tendering from 2018, and Copenhagen, the capital city of Denmark, will merely need to replace 400 city buses by 2020, and achieve zero emission for all city buses by 2025.

The 20 Yutong full electric buses is the first tender for Denmark in purchasing full electric city buses, which is also the beginning of the electrification of its public transport. In fact, the conclusion of the contract with Denmark is closely related with the demonstration operation of Yutong’s full electric buses in Iceland, France and other European countries. The Danish operator UMOVE has learned from various channels that Yutong's products have good performance, and feature good results amid the demonstration operation in Iceland, France and other European countries. Therefore, they finally chose Yutong products for tendering.


The European market has always been the goal on which Yutong has always made persistent efforts. So far, Yutong’s has delivered over 7,000 buses and coaches to Europe, including France, the United Kingdom, Spain, Norway, Bulgaria, Romania, Slovakia, Russia and other countries and regions.