On the morning of January 19 local time in Chile, 100 E12 full electric buses were entered in Santiago, the capital city, to a local public transport operator. Gloria Hutt, Chile’s Minister of Transport and Telecommunications, Chile’s Vice Minister of Transport and Telecommunications, Director of Santiago Transport Management Office, General Manager of Vule, CEO of STP, CEO of Engie (Chile), President of the dealer Gildemeister, Chang Hao, Vice General Manager of Overseas Marketing, Yutong Bus, and a group of local public have witnessed this great moment together at which these Chinese new-energy buses hit the road in the South America. 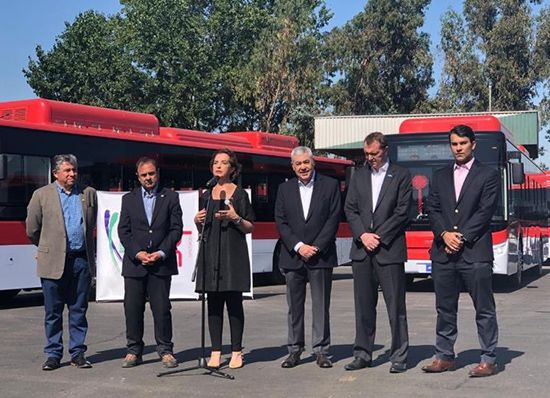 Gloria Hutt (3rd from left), Chile’s Minister of Transport and Telecommunications, attended the ceremony and delivered a speech

In recent years, with the requirement of an eco-friendly environment, the Chilean government has intended to introduce more electric buses into the country. The aim of using these buses is to improve the air quality, provide the people with better experience of public transport, and make Chile a pioneer in Latin America in the promotion of electric buses so that more investment could be attracted. So far, a total of 872 buses produced by Yutong are used in Chile among which 118 are new-energy ones, ranked first among Chinese brands in terms of the total sales volume in the country. Currently, there are more than 21,295 buses produced by Yutong used in the Latin America (as of November 2018), making Yutong the Chinese bus brand in the region.

Yutong E12 as a great support for the eco-friendly public transport locally with 300km driving range and 2.5h quick charging

A comfortable and cozy design is used for the E12 low-floor bus with all human-friendly facilities such as the air-conditioning system, USB ports, wheel chair area, and get-off buttons. Meanwhile, with a large power (324kWh) and low energy consumption, this bus boasts a driving range of 300 kilometers. Moreover, it is equipped with a 150KW DC charger so that it can be fully charged within only 2.5 hours, shortened by 3 hours compared to a 60KW charger of the European standard and bringing more flexible operation and deployment. More importantly, Yutong has produced more rational adjustments to E12 based on the actual operations in Chile. For example, the telematics system is customized and developed and a number of optimizations have been conducted based on the local landform and driving habits, meeting the needs of local passengers on the public transport as much as possible. Regarding the conservation of the environment, the full electric buses produced by Yutong will contribute to an annual reduction of carbon emission of 9,700 tons in the country, thus bringing significant benefits for developing an eco-friendly environment.

At the ceremony, Gloria Hutt experienced the ride on an E12 full electric bus. She was full of praise on the environmental friendliness and quietness of the bus. She said, “This bus has Wi-Fi and USB ports. With a special design of the seats, it makes people much more comfortable. Everything in this bus is human oriented. Now what we need to do is to experience and enjoy our public transport. It can be expected that there would be more and more people choosing public transport in the future.”

Chile’s Vice Minister of Transport and Telecommunications in an E12

Entering in Chile for 14 years, Yutong is given credit for its one-stop services

Besides outstanding products, excellent services Yutong offered in Chile are also one of the major reasons for it to win this big order of 100 buses. Since entering Chile in 2005, Yutong has been expanding in this market for 14 years. In 2012, the product of Yutong was chosen by Chile national football team as the shuttle bus. In 2015, a majority of the players were transported by the ZK6136 coach produced by Yutong during the FIFA U17 World Cup. The reputation and strength of Yutong have been recognized in Chile and such achievement could not be produced without its thorough research before entering the market and the relevant strategies it has developed. 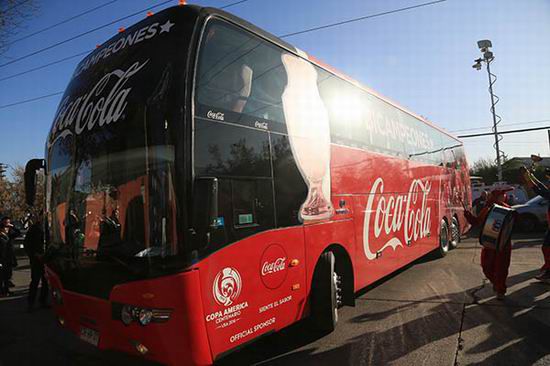 Currently, Yutong has 7 service stations in Chile with Santiago, the capital city, as the center and various major cities being covered. Besides, the company performs reviews and makes improvement on each station each year to ensure a service network within a radius of 200km from the station and that every one of its products can be covered. Chang Hao, Vice General Manager of Overseas Marketing, Yutong Bus, said, “Our priority in Chile is to ensure the smooth operation of our products through the collaboration between our service team for new-energy buses and the local dealers and customers. Meanwhile, we provide customers with timely guidance and responses regarding issues and questions on the operation and management of our products and try to meet their needs as soon as possible. Furthermore, we constantly improve our service capabilities and push forward the service standardization for the dealers and customers, and help the customers create the system to provide service support for ensuring smooth operation of the buses.”

The 100 E12 full electric buses delivered this time will be deployed across the public transport network of Santiago, replacing some of the existing diesel-powered buses which have been used for years with high failure rates and severe emission and noises. To provide the public of the city with better experience and improve the service support for the entire public transport network of Chile, Yutong has established a dedicated customer service team together with the dealers. Ahead of this, the service stations have carried out comprehensive training on issues arising during different periods such as before and after the delivery of the full electric buses and during the earlier and later operation of these products, covering a number of courses such as instructions on how to drive the buses, maintenance, energy saving, structure and working principle of the buses, emergency measures, and the addressing of common failures. Nowadays, the methods for producing and using new energies emerge constantly due to harsh realities such as the deterioration of global environment and the severe shortage of fossil fuels. With developments such as technological upgrades, mobile Internet, and smart technologies, people are increasingly demanding regarding their travel experiences. Such upgrades of needs will drive forward a shift of the bus manufacturers and related industry chains to the production of high-end, comfortable, smart, connected, and new-energy products.

It is understood that Yutong has a completed new-energy product portfolio with the length from 6 to 18 meters. Its products have been promoted in more than 300 cities with brilliant outcomes and more than 26,000 units are sold each year with a total sales volume of more than 110,000 units, ranking No. 1 across the world. Yutong has been widely recognized globally for the quality of its new-energy buses with a large number of products been sold in markets such as France, Bulgaria, Iceland, Denmark, Singapore, Macau, and Chile. Successful trials have been performed in markets such as Australia, New Zealand, Columbia, and Argentina. In 2017, the company won the Busworld Award 2017 (Ecology Label), which is an excellent proof of the outstanding achievements of Yutong.

When talking of the future of the company, Chang Hao, Vice General Manager of Overseas Marketing, Yutong Bus, said, “Yutong has been committed to being a globalized company with more balanced development. Its goal is to have significant shares in overseas markets, expand in the high-end market, and improve the capability of high-end products, thus eventually becoming a leading provider of bus travel solutions in the world.”