The Australasia Bus & Coach Expo 2017 was held at the Convention and Exhibition Center in Gold Coast, Australia on September 24-26, 2017. More than 1,600 delegates from Australia, Europe, China and other countries participated in the fair. As one of the and most influential bus events in Australia and New Zealand, a number of world renowned bus makers were gathering here. 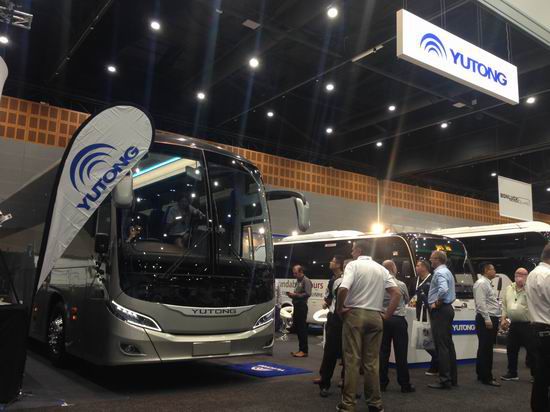 This is the 7th time for Yutong to attend the Australasia Bus & Coach Expo. Yutong brought three products to the fair, namely ZK6760DAA, ZK6938H and T12. It is worth mentioning that the T12 made its premiere on the fair. This vehicle adopts the same platform as the high-end tourism coach developed for the European market.

With the principles of “Responsible for customers” and “Don’t consider the market as a test ground”, Yutong has completed the platform development after three years of hard work. On the basis of this platform, the company has further conducted corresponding tests and development for two years especially for the Australian market and customer needs. The launch of T12 in Australia once again showcased the superior quality and stable safety performance of Yutong buses. It caused a sensation on site that attracted many visitors and customers to take a close look at it.

Later, Yutong will further operate the Australian market and give more support to its partners to conclude a long-term partnership with them. Meanwhile, Yutong will also increase the services and support to customers to create more value for them and help them succeed.